While large trucks can pose significant risks to drivers on the road, it’s important to keep in mind that they are a necessary part of life here in the United States.

As a matter of fact, about 71% of all freight cargo is transported using trucks, according to the American Trucking Associations. Continue reading to learn about truck accidents.

It may be obvious that when passenger cars collide with large trucks, the trucks have an advantage. Due to their massive size and weight, truck occupants are much more likely to survive these types of accidents than passenger vehicles are.

That’s why when trucks and cars collide, the occupants in passenger vehicles are much more likely to sustain fatal injuries than truck occupants.

According to the Insurance Institute for Highway Safety (IIHS), 4,136 people lost their lives due to truck accidents in 2018. Of those who died, 16% of them were truck occupants, 67% were passenger vehicle occupants, and 15% were pedestrians, bicyclists, or motorcyclists.

In fact, in 2018, 96% of those killed in crashes involving passenger cars and large trucks were passenger vehicle occupants.

Of all motor vehicle accident fatalities that occurred in 2018, only 11% of them were attributed to large truck crashes.

In 2018, collisions that involved another large truck killed 62% of truck drivers involved in multiple-vehicle wrecks.

Locations and Times of Fatal Accidents

Also in 2018, half of all fatalities from large truck accidents happened between the hours of 6 a.m. and 3 p.m. In addition, 30% of vehicular accident deaths during the same time of day didn’t involve large trucks.

During that same year, 16% of large truck fatalities happened on Saturday and Sunday, in contrast to 34% of fatalities that didn’t involve big trucks.

According to the IIHS, one of the biggest risk factors for truck drivers is fatigue. The federal hours-of-service regulations state that drivers may not be on the road for more than 11 hours at a time. However, due to the impacts of COVID-19, these regulations have been temporarily lifted. It’s important to be extra careful around trucks during this time until the regulations have been reinstated.

It may seem like common sense that due to their size and weight, trucks need more time and distance to stop than passenger vehicles. Similarly, the time and distance needed for trucks to be able to slow down and stop drastically increases when the roads are wet and slippery.

While truck drivers may be at fault for some trucking accidents, most of the wrecks they’re involved in aren’t actually due to their mistakes. You see, passenger car drivers aren’t always aware that trucks more than just big cars. They can’t slow down or stop nearly as quickly as passenger cars can.

Tips for Driving Near Trucks

Stay Out of Blind Spots or “No-Zones”

Big trucks have massive blind spots that prevent them from being able to see all areas in front, to the side, and behind them. When reviewing the Federal Motor Carrier Safety Administration (FMCSA) graphic below, you can see that trucks have major blind spots, or “no-zones” as they’re frequently referred to. If you are driving near a large truck, you should never stay in a no-zone for very long. 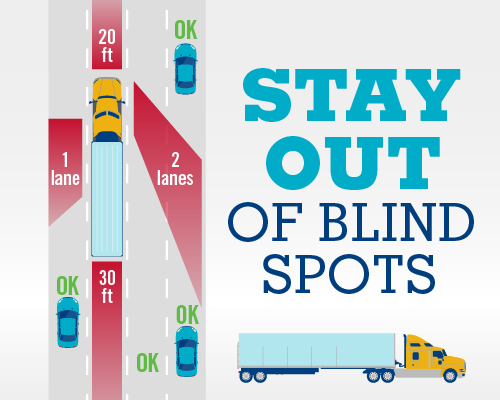 Always Pass on the Left

While this is a rule that you should follow no matter what type of vehicle you’re passing, it’s particularly important when passing trucks. Because their blind spots are much more significant on the right, it’s a lot safer for you to pass on the left since you’re far more likely to be seen.

Be Considerate When Merging

When you merge onto a highway and a truck is in the right lane, don’t expect the truck to move over for you. It’s your responsibility to speed up or slow down so that you don’t disturb the truck’s speed.

Tailgating a truck is extremely dangerous and should always be avoided. If the truck in front of you needs to come to a panic stop, you need enough time and space to slow down without rear-ending the truck.

If you’ve been injured in an accident with a truck, or with any other vehicle for that matter, we may be able to help you recover the compensation you deserve. Our team here at The Ahearne Law Firm, PLLC is highly experienced in these sorts of cases and has helped hundreds of other people just like you obtain justice. Don’t hesitate to contact our office with any questions you may have right away.

Call the New York truck accident lawyers at The Ahearne Law Firm, PLLC today at (845) 763-4100 to speak with an accomplished attorney about your case.